Are you guys all caught up on the USATF scandal from this weekend? If not, here’s the Reader’s Digest version:

During the 3000-meter race, Gabriele Grunewald (sponsored by Brooks Running) clipped the heels of Jordan Hasay (sponsored by NIKE, coached by Alberto Salazar) on the bell lap. Grunewald went on to smoke the other ladies and win, qualifying her to represent Team USA at the World Indoor Championships in Poland. The clipping didn’t go unnoticed by the officials and was reviewed and thrown out, twice. Salazar continued to protest and Grunewald was subsequently disqualified, giving Hasay a spot on the team.

The ladies of Track & Field showing solidarity for Grunewald.
(I don’t know who to credit for this photo, but if someone knows, please email me.)

Twitter and the running world exploded, the case was reviewed again, and the DQ was thrown out, reinstating Grunewald as the champ. Grunewald and Hasay both released statements but I hear another controversy is brewing on the men’s side, again involving Salazar.

What’s this got to do with today’s post? Nothing except when I think of time trials, I think of track meets. Also, watching Mary Cain at these races was a delight. 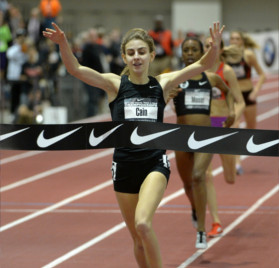 She’s also coached by Salazar and sponsored by NIKE. (Image courtesy of USATF.org)

You know how when you’re in the middle of training season and you’re working hard and getting your runs in but you’re kinda sick of training and just want to go out there and see if all this work is paying off?

Do a time trial. Set up a course (preferably flat), warm up like you would for race day, practice with your race day gear, and do it. I generally set the distance to be shorter than race distance by half or a little less. 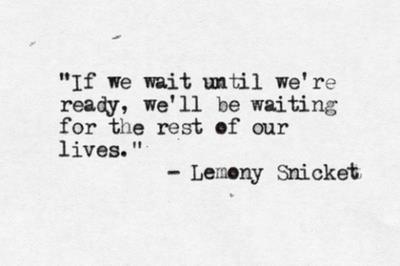 What exactly does this do for you?

If a time trial doesn’t go so well, and external circumstances weren’t the reason, it’s not too late in your training cycle to switch things up and still meet your race day goals.

Don’t be afraid of the speed and don’t be afraid to try a new racing strategy. Better you do it in a time trial workout that on race day morning.

I’ve talked about Fartleks as a workout before here and here. They’re a no-brainer workout that can break up a longer mid-week run and get your legs turning over.

They’re also a great exercise to cover more distance in less overall time than if you were to go out and run at a consistent pace. Time efficient + no brainer = happy Abby. Seriously, when I run at 5/6am, the last thing I want to do is make it complicated and laborious.

At o’Dark Thirty in the morning, it had better be a no-brainer for this runner.

But there IS one small little key to fartlek running that makes it effective and not just a bunch of random pickups. That key is your recovery pace.

And the key to that pace is that it’s NOT a “recovery pace”. Rather, the pace between your speed intervals should be about 7/10. Comfortably fast, I like to call it.

Fartlek runs are about working hard through fatigue without full recovery between sets. So, you sufficiently warm up and commit to an interval distance or time and race that interval at 5K pace. And that’s not so hard for, say, 200 meters.

The key is that when you slow down, you don’t slow waaaaay down. I tend to slow myself down by about 60-80 seconds or 7/10 pace, which is usually half-marathon pace for me so I make sure I’m still cranking out the numbers between sets.

I recover-ish. It doesn’t seem hard at first, but just you wait. 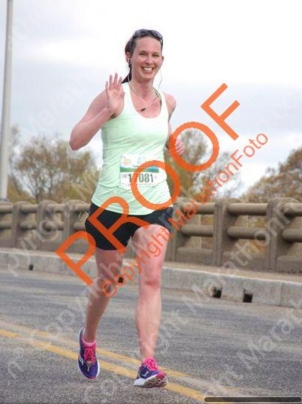 Yeah, I’m smiling at mile 8 but my half-marathon pace is killer during a fartlek workout.

The difficult part isn’t kicking up the sprint, it’s maintaining the off pace.

So next time you’re short on time but need to get some quality miles in–or you just have no brain for your workout, hit up a fartlek workout. But make it a GOOD fartlek workout and keep that recovery pace in your half-marathon racing range.

This hospital PT stuff is rough.

Hooray for scrubs and sneakers because if I had to wear real clothes and shoes and do all this stuff, I’d be in big trouble come Chicago in three weeks. 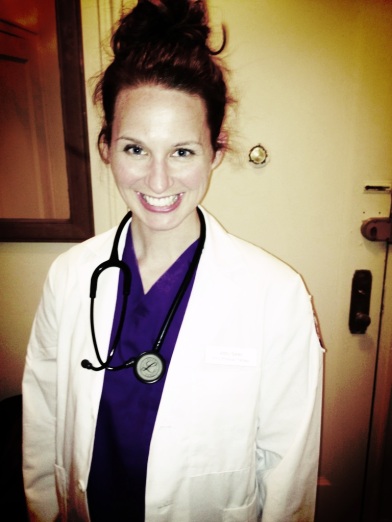 But my legs are still getting adjusted to 8 hours days on my little feet. I don’t sit for most of the day, rather, I stand around quite a bit. Walking I can do but standing? Ow. My legs have felt tight and tired for every one days since I started at the hospital. 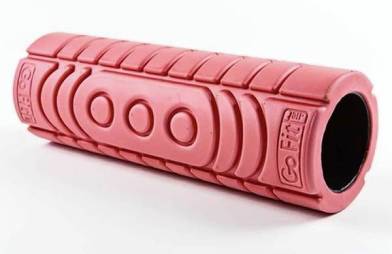 So I’ve been foam rolling a lot and putting my feet up whenever possible because this week started back on training for Chicago.

When trying to maintain speed, it’s a good idea to do speedy workouts. One of my favorites ends up totaling 6 miles but feels like more. Here’s how it goes:

This run is a great reminder of what speed I’m capable of running. I aim to have my 400s under 90 seconds. I succeed most of the time except for #2 when I completely lost my focus because I thought I was going to hit a squirrel.

Dear Mr. Squirrel,
The track is no place for you to be wandering. You might get run over by a sleepy runner.
xo
Abby

The other thing I like about this workout is that my run home pace is always close to race pace and feels effortless! It’s amazing what a little perspective, warm-up, and pushing crazy-fast will do to make your race pace feel easy.

A good reminder that I can do it for 13.1 miles, no problemo.

Don’t hate on the speed workouts. They keep you in tip-top shape and fast for your next race! It’s not always about lots of miles, but the quality of those miles.

What was your Wednesday Workout? Tell me all about it!

Now go out and run.

I’m really pumped that y’all have helped me raise over $3500 for Team Challenge already. And we still have a week to register for my Virtual 5K benefitting the Crohn’s and Colitis Foundation of America and win fabulous raffle prizes.

There’s also a chance a new prize will be added sometime this week. You definitely won’t want to miss a chance at this one!

You guys have all been so awesome at donating, I’m kinda feelin the pressure to PR so I don’t embarrass myself. Confession: I don’t link my timing chip to either my Facebook or Twitter account because I’m afraid I will jinx myself and have a totally terrible race and then everyone will know.

I’m such a chicken.

But I’ve been training smart and training hard. Long runs? Yeah, they happen. But “long” running for a half is nothing like long running for a full. Two hour runs are waaaaaaaaay easier than three and a half hour runs.

There’s a weird rumor in the running community that if you just run a lot of miles you’ll get fast. That’s kinda only half true. Maybe one quarter true.

Sometimes you gotta talk yourself into doing what you don’t wanna do.

If you’re working on your overall aerobic fitness or ability to hang in there for long miles or trying to amp up your mileage, then adding on longer, slower miles will help. However, if your goal is to run faster, long runs are not specifically your jam.

You need workouts that are well below your race pace that challenge your body in order to make that race pace feel like a cake walk.

Me? I’m gonna hit up some 400s and 200s on the track this week. Doesn’t mean I don’t get the mileage in because I’m going to warm up for two miles and then let the beast out and race like an animal.

Only the cool kids talk in meters and kilometers.

It’s the simplest thing in the world and one of the primary principles of exercise: SPECIFICITY in training. You gotta run and you gotta run FAST. It’s that simple and there’s no way round it.

Grab a fast friend and try to keep up. Then watch the minutes melt away from your PR.

Now go out and run.

I take that back, you are NOT a dummy just because you don’t know the ins and outs and physiological implications of speed work. Catchy title, though, right?

Speed work can benefit any and every single runner out there. The essential gist is that speed work increases your VO2 max and makes your body function like a well-oiled machine. ROAR!!!!!

Whenever training season rolls around, the Twittersphere blows up with questions about speed work.

Deep breath everyone. I know. So many questions. Let’s hash it out.

Run fast for a short period of time/distance. Recover by slowly jogging until you catch your breath. Do the same distance/time again. Recover again. Keep doing it for 30-45 minutes.

Don’t worry about what your heart rate is. Don’t stress about how far you’re running. Don’t get all caught up in your splits.

If you keep track of your splits and long run times, you will see a change in them as long as you are working AS HARD AS YOU CAN every time you do speed work. 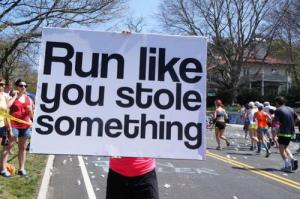 I’d be running pretty fast if that were the case.

Work hard and you will see results. Do the same thing every time and you won’t. It’s that simple.