When I first started running marathons, social media wasn’t around. I guess chat rooms were still kind of a thing (does anyone remember chat rooms?!?!) and social media may have been in its infancy but I was definitely not cool enough to be into it.

So when I started training for the NYC Marathon in 2003, I told everyone by email or word of mouth that I was running. That way, I couldn’t back out. Everyone would know. It was a great motivator to get my training in. 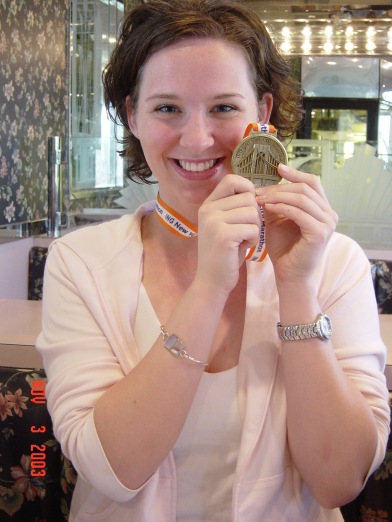 I finished! It was torturous, but I finished.

Every year after that, as marathon season ramped up, people would ask, “Are you running?” It was always an enthusiastic “YES” from me. For 9 years, I would share my racing plans with everyone, often times raising money for charities close to my heart.

More recently, I’ve been keeping my big races to myself. I happily train without telling anyone when I’m racing. I don’t share my splits on Daily Mile. I don’t share my runs and progress on Twitter. As much support as the cyber world can offer during training, there is also a lot of pressure that goes along with it.

The Hamptons Marathon (that became a half marathon for me) was a secret race.

Perfect strangers can track you online during a race and when people know your goals, they also know when you’ve failed to reach them. It sounds silly, but the goals I set for myself are very personal and I prefer to keep some of them private.

When I decided to train secretly (or just less publicly?) for the Hamptons Marathon this past Fall, I was unsure how my post-op body would respond.

From colostomy bag to J-pouch, my little body has been through the wringer.

Would my J-pouch hold up? Would I get sick again? Could I really get all that mileage in less than a year after two major surgeries? I signed up for the full marathon, knowing full well that I might need to drop down to the half.

I decided to keep the race (largely) a secret and see how training went.

Clearly, I was happy with my choice to drop down.

I knew a few weeks before that this was probably going to be the case and I was oddly at peace with it. Because despite the 65 mile weeks, grueling summer workouts, and faster than ever times, I knew what I could do and what I couldn’t do. The half I could do, the full I could not.

It’s not that I’m afraid to publicly fail. I’ve done that plenty of times. It’s just that as I test myself and try new things, I prefer keeping those personal goals tucked close to my heart.

Have you ever run a race and not told anyone you were training for it? Or do you prefer to get the support of your friends near and far during training? It’s totally a personal choice and I’m curious if anyone else has switched back and forth like me. Or maybe I’m just crazy…?

Tonight, I am shamelessly going to direct you to my blog friend Ali’s recap of her very first marathon that she completed on Saturday in the Hamptons. You might think, “oh, the Hamptons sounds like ann exciting place to run…maybe I’ll run right into J. Lo or Alec Baldwin.” Can I tell you, it is no small feat that Ali #1. completed her first marathon and #2. did it out in the Hamptons. The Hamptons is the boonies, people. I mean, farmland and deserted roads with scattered mansions along the beach. The season of everybody going out and partying in the Hamptons ended Labor Day weekend and that place is a ghost town these days. No small feat at all for her to have slogged through late miles with few crowds to cheer her on (though her family gets and A++ for cheerleading). It’s not like the New York Marathon where there are crowds everywhere. So, mad props on both fronts, Ali!

Ali’s journey to the marathon was part of the Run For The Rabbit campaign sponsored by my favorite running shoe store here in the city, JackRabbit Sports. Ali has Chron’s disease and her charity of choice was the Chron’s and Colitis Foundation of America. She finished second in her fundraising efforts (amazing!) and raised over $20,000 for CCFA. This charity is close to my heart, too, because I was diagnosed and am learning to live with Ulcerative Colitis. I’d like to thank Ali *very* publicly for all of her efforts to help researchers discover more about our collective diseases and work towards a cure. *sniff*

Marathons (or any races at all) always mean more to me when I’m running for someone besides myself. Don’t get me wrong, I run for me, too. But when I’m struggling through a tough part of the race, what gets me through is not my vanity or my desire to be a better runner, it’s the idea that I’m out there for people who can’t be out there for themselves. Ali ran for herself, but she ran for me, too. And I will never forget that. *sniff*sniff*

Consider this next time you sign up for a race. Did you know you can always raise money at any race for any charity? Just contact them and find out how to set up a donation page. Simple as that.

Anyway, her recap is worth reading. It made me cry, which is apparently not too hard to do today. Ali’s hard work and dedication to her training is both admirable and inspiring. She is also to blame for my current addiction to 16 Handles.

Now go out and run, friends!

Maybe share a little about who/what inspires you these days???