Back in the early days of marathoning, there was water. That’s it. And sometimes, there was barely even that. You wonder why runners looked like this at the end of marathons:

Maybe there was something else going on with Ms. Andersen-Schiess, but certainly she could have benefitted from some sustenance at this point, no?

Gatorade® became the drink of choice for professional athletes in the late 70’s (had been around since 1969) and not long after, along came the Powerade® and Power Bar®, which looked like a poop log and didn’t taste much better. About a decade ago, we started hearingabout Gu® which looks and tastes just like it sounds. Not long after that, Clif Shot Bloks®, Sport Beans® and Nuun® tablets started making the scene and really making a go at being the fueling mechanism of choice for runners the world over.

I tried Gu®. Didn’t work for me. Made me gag and made my hands all sticky. I cannot cope with sticky hands during a race. It makes me nuts. I tried PB & J sandwiches, but they were too tough to get down in the later miles. I liked eating Rice Krispy Treats® for a while, but again with the sticky situation. Plus, all the chewing made me inhale air into my tummy. No good. I grabbed Sport Beans® from a very kind Marine Corps officer during my first Marine Corps Marathon in 2004. The consistency worked for me, but they were far too sweet for me. (Yes, I said too sweet for me. Don’t look so shocked)

What I’m saying is that there are a lot of fueling options out there and you have to find the one that’s right for you. It’s gotta be something easy that you can chomp down in a few seconds so you don’t waste time with wrappers and stuff. It’s gotta be tasty, or at least, it can’t make you gag. It’s gotta have some redeeming qualities: electrolytes are a must, caffeine is a bonus. There are just so many to choose from!

During my most recent Marine Corps Marathon training, I gave Clif Shot Bloks® a go and it’s been true love ever since. 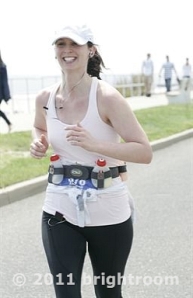 The mid-miles may have sucked (me and the POJs were best friends), but I was STILL properly hydrated and fueled up for the big finish in New Jersey.

Once you find your magic fueling product, you have to know when and how to use it. Too little and you bonk, too much and you barf. Yuck. Here are some tips on how to fuel while running.

Trust your training. Training with your fuel is just as important as training your body. Without it, you’ll likely not hit that sub-four hour/Boston qualifier/just finishing the damn race goal. Practice with your fuel. Figure out what works for you. Make a schedule to follow during your race. Pack enough to get through your race. Trust yourself. Trust your body.

Tell me, what are you fueling with these days??? Hey, New York City Marathoners, what are you carrying with you in TWO WEEKS (yikes!)?