I’m not gonna lie, Friday was one of the toughest days I’ve had in a long time. Not only was it such a long day that my husband couldn’t even drag my tired butt out to one of my favorite restaurants for dinner, but I seemed to come up against resistance on every front. What should have been a really momentous day (DPT school orientation!) turned out to be a challenge to see how tough I really am.

Well, with the help of three very special people, I’m tough as they come 🙂

So, no Fitness News last week. Trust me, there will be plenty to round up this week, what with runners plowing through Hopkinton as I write this blog (go runners!). Also not going to lie, Boston is NOT on my bucket list of races to run. In fact, I’m really not a fan. I like having the goal to qualify for Boston, but when I do qualify, I don’t know if I’ll even bother running.

Boston is a prestigious race because they only allow qualifying times, no raffle. This year, the qualifying times were made even harder so as to keep out the casual runners. They have all sorts of reasons for this, but the main one is to keep it small and prestigious.

When I trekked to Boston a few years ago for Patriot’s Day to watch the famous Boston Marathon I’m not gonna lie, I was shocked at the talk that I heard in the crowd. “They didn’t qualify. Look, they’re running for a charity. Losers.” Yeah, only losers and slow runners are on charity teams. Right. 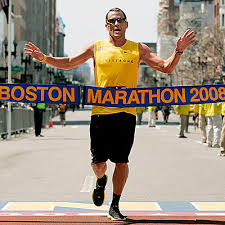 Lance Armstrong is such a loser with his 2:50:58 time finishing 488th place and running for his charity, Livestrong.

It’s a snobby race. Remember, this is also the race where the director tried to forcibly remove the first woman runner from the race while she was running. Awesome legacy, Boston.

I may run it, I may not. But if I do, you can count two things: I am there because I qualified AND I am running for one of my favorite charities. BOOM. Take that, snobby Boston Marathon people.

When I ran my first marathon back in 2003 in New York City, the temperatures reached well into the 80s, almost the 90s. It was hot, humid and horrible. Remember, Obi-wans? Ugh. I’m not gonna lie, it was terrible. I was unprepared for the heat but I proudly crossed the finish line and will always remember how hard I fought to get to Tavern On the Green.

Today’s Boston Marathon is supposed to be a hot one. It’s 78° right now, at 11am, and will get into the high 80s by the time people barrel down Boylston Street towards the finish line. This year is the first year that the Boston Athletic Association has allowed deferrals due to the weather.

Really? You can defer because the conditions aren’t ideal?

Wow. This is a dangerous precedent to set. I thought marathon running was only for the toughest of the tough. I have run many a long run (20+ miles) here in NYC when it’s been hot as hell, humid like you wouldn’t believe, raining like it’s the end of days and so cold that I couldn’t feel my toes after mile 3. I made it safely through every one of those runs. It’s called personal responsibility.

I slowed down. I hydrated properly. I took in fuel when I needed it. I walked. I held myself personally responsible for every step I took. I also knew when to call it quits and head home because my body just wasn’t having it that day.

I don’t think it’s a race director’s job, nor is it his/her responsibility to make sure every single runner is fit to run. I understand that the sport is getting popular and stupid people think they can just lace up their shoes and be fine, but that is their decision. They are adults. The problem is, these people drop like flies and the media makes it into a gigantic circus around how many people were taken to the hospital. The fact of the matter is, the number of people who die during marathons, while tragic, compared to the number of people running marathon is unbelievably low. And mostly are due to heart attacks, not heat stroke.

I will probably get a lot of flak for sharing this opinion with the Internet world. Really, though, isn’t it up to the runner to decide whether or not they can run that day? And isn’t it unfair to next year’s runners who have qualifying times to be cut out because of the weather this year? Boston wants to be all prestigious, but it seems to me that they are just trying to protect their name and their reputation with this decision.

Thoughts? Comments? I really want to hear them. Tell me what you think!

Full disclosure: I am NOT qualified for Boston next year.