I am married to a man with an enviable metabolism. He eats all the time (Obi-wan calls his ability to do this “impressive”), needs only a small amount of exercise to stay in shape and has the best physical structure a man could have. I’m a lucky girl 🙂

I, however, have a decidedly slow metabolism. Just last night, JB and I were chatting about some people’s ability to just eat and eat and eat and exercise the exact same amount as me, yet weigh 30 pounds less. My loving husband turned to me and said (in the sweetest way possible), “My darling you are beautiful and have many talents, but you have a very slow metabolism.” He’s right, it’s not an insult. I know it. He knows it. And now you know it. Metabolism is hereditary (though it can be increased by adding muscle) so it’s not insulting or shameful to recognize that I have a slow metabolism.

Over the past 10 years or so, I’ve fought hard to find a happy weight where I can train, live, and manage my diet without going bananas. It’s not easy when not only do I have a pokey metabolism, but I have a digestive disease that doesn’t allow me to eat things like salad, raw vegetables, legumes, or anything with a hint of insoluble fiber in it. So, yeah, it’s tough but I manage and am still learning how to juggle a serious workout program with this stupid disease. Tricky.

Me, late teens/early twenties. At least 10 pounds heavier. Oh, but wasn't my metabolism supposed to be faster back then?

But the other day someone said something that made me irate. In an attempt to compliment me and my “athletic” physique they said, “…but you just have good genes.”

Oh yeah, me with my slow metabolism and the auto-immune disease that is likely hereditary, I got GREAT genes.

It made me so sad that someone would just diminish all the hard work that I put into maintaing a healthy diet and exercising almost every day and just chalk it up to “good genes.” It’s WORK. I don’t look the way that I do by just sitting around eating cupcakes all day long. I don’t exercise every now and again. I don’t drink like a fish and eat pizza day and night. I WORK at it.

By dismissing someone’s physique or athletic accomplishments with the excuse that it “must be their genes”, you disregard the hours and days and weeks and years they put in the gym, on the road, in the pool, on the bike, on the mat, in the kitchen that have gotten them to where they are physically. Sure, genetics may separate the Olympians from the Age Group Placers but that’s about it. 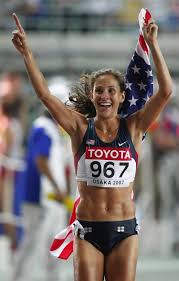 Girlfriend works hard for those abs!

You could do it. You could train for 6 hours a day, hire a coach, work with a nutritionist, spend every waking moment thinking about your sport and put 110% into every single workout with one goal in mind: winning. You could do that, too. Heck, maybe you are Olympic quality and you just never knew it because you never trained like you were. Try training alongside one of those athletes and then tell me that it’s luck or genetics or some other thing outside of their control that got them to where they are today.

Don’t be ‘That Guy’ who says they can’t do/be something because “it’s not in my genes.” That’s an excuse. I have short, stubby legs and would likely be a better swimmer, but I like running and so I run. Am I the fastest runner in NYC? Ummm, no. But I am continually improving because I work hard. You can do it, too. Anyone can do it. But stop with the excuses. And stop chalking it up to genetics. It’s guts. It’s training. It’s commitment.

<jump down off my soap box>