Let’s be clear about one thing from the beginning: every runner chafes a little bit sometimes. When tight fabric rubs on wet skin, there is the opportunity (if not inevitability) for chafe to happen. It’s not pretty, it’s not comfortable, it’s not sexy. But it’s a Very. Real. Problem.

Reasons for chafe or blisters:

-your clothing is rubbing against your skin

-your skin is rubbing against your skin

-your shoe is rubbing against some part of your foot

Chafing doesn’t just have to do with being a heavier runner or a slower runner, it has to do with the fact that our skin is moist and there is friction happening against that wet skin. It’s as simple as that but not always something we can fix just by sizing up in shorts or buying a moisture-wicking sports bra. I have had chafe since I started running at age 10. Mostly it was because I wore cotton (the only option at the time) or soccer shorts when I ran cross-country, but it’s also because I wear a sports bra and it has to, by definition, be fitted enough to reduce movement. Hence the chafe. I also do not look like Paula Radcliffe. 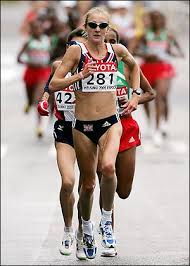 Paula is tiny and floats on the air. She probably does not chafe. (photo courtesy of http://www.paularadcliffe.com)

But chafing does not only happen for women, heavier runners, slower runners or in the summer months, it is a HUGE problem for male distance runners. Nipple chafe. Ouch. You guys get it bad because it sort of sneaks up on you. Any male marathoners out there know what I’m talking about and many of you spectators have probably seen the men with the blood-stained t-shirts at races. It’s not pretty. 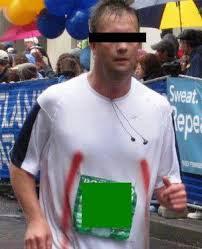 So, how to you deal with chafe? The old wisdom was Vaseline. They still hand it out at around mile 20 during many marathons (it’s kind of weird, they scoop it on a stick and hold the sticks out for runners to grab as they go by…kinda like water stations). Problem with Vaseline is that it’s messy and, in my experience, it doesn’t last the amount of time I need it to. Enter my salvation: BODY GLIDE ®
I discovered this little gem at a marathon expo in 2006 and it has never let me down.

My BFF for every single long run

–Prevent chafe: under the sports bra, between the arm and the armpit, between the thighs, wherever you have tags, around the waistband, and on those ever-so-sensitive nipples for you men

–Prevent blisters: between your toes, around your Achilles Tendon, on the outside of your feet, at your sock line, when you’re wearing a new pair of shoes (non-running shoes, too!) that aren’t quite broken in yet…

Use it everywhere and anywhere you find your skin is irritated from friction. You may find that Body Glide® allows you to run a little faster or for a little longer. Less friction and less pain = faster leg turnover and more focus on your running. It could very well be the Runner’s Secret that takes you to the next level in your training. Or, at least, it will make it less painful.

What are you waiting for? Grab the Body Glide® and go out and run!

*Per usual, I was not compensated in any way for this post. I simply ♥ my Body Glide®*