So, we’ve all heard the old adage “There is no ‘I’ in TEAM” (I always think of the smarmy character from LA in Scrooged when I hear that line!) but I really think that there might just be a little “i” in Team. At least, for me there is.

"How's everyone doing up there in the booth, Elliot?" (photo courtesy of cinemagi.ro)

This is my all-time favorite softball picture. Tiny bat!

Being a grown-up can rob us of that camaraderie we so need in our lives. Competition for jobs, boyfriends/girlfriends and med-school placements make enemies of people who might otherwise be wingmen or study-buddys. I feel that this stems from an insecurity within that manifests itself in a very serious isolationist mentality. So sad. Happily, I learned that there ARE in fact people (even at NYU) who are willing to put insecurity aside and work with a struggling classmate *ahem* in, say, summer Biology. My friend, Tweedy, was an awesome example of that for me and, consequently, saved me from having to re-take an truly hideously demanding class. Yay, Tweedy! However, she is now finding that her Summer ’11 comrades are not of that same mind which left us both shaking our heads and asking “why?”.

I feel that in life, in work and in fitness, touching base with another person every now and again is helpful, if not absolutely necessary. My deeply fabulous running club proved it yesterday. So many of them seemed hesitant to push through their Yasso 800s on the first go-round. By their final loop, they were racing each other and finding a new level of speed they didn’t even know they had. Amazing! I love it when a plan comes together (first one who can tell me what character/person made that line famous, I will dedicate a post to you) and I love it even more when it was my plan. I am a little bit like an evil wizard at run club. 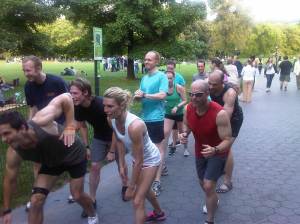 Ready to rock the last Yasso...

I, too, need to be pushed. I go to classes and clubs where I am not my own boss and seize the opportunity to race myself and anyone else in my vicinity. I love it when JB is juuuuust a little bit ahead of me at run club and I am working hard to catch and pass him. It’s the best to have a rabbit! 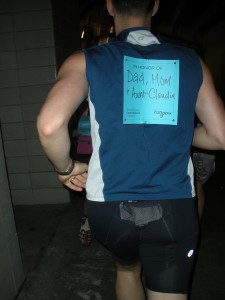 My point is this: People need people, and don’t be afraid to join a group because you aren’t the bestest or fastest or most talented person in the group. I’m genuinely scared when I am the bestest/fastest/smartest person in the room because it means I have no rabbit to chase and it makes me L.A.Z.Y. So, join a club every now and again, try a new class and let it kick your butt. Work to your limits and then see if you can push past them to find new ones. Find a rabbit. Get that “I” out of being a part of a “TEAM”.